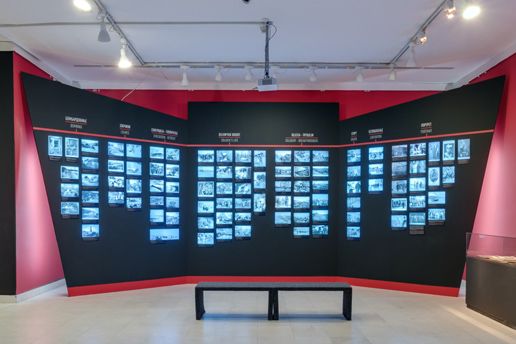 The exhibiton of works by painters and photographers in the Serbian Army, on the occasion of marking the centenary of the First World War, encompasses over 100 paintings of official war painters and an almost equal number of photographs by official photographers in the Serbian Army. The exhibition also includes the works of war correspondents and photo-amateurs, women painters, volunteer nurses, as well as the works of other artists who were participants in the war, either as conscripts or volunteers. Knowingly and expertly selected pictures show the broad diverse and dynamic Serbian art scene of the mid 1920s, built on impossible paradox. In the midst of destruction and desperation there occurred an artistic flourishing of a specific style of Serbian Impressionism – a painting style born in exile that reached its pivot.

The seven exhibition segments: Preceding Events: Modernism, Farewell, my children, Exodus, My Sun, whither do you set, The Thessalonika Atelier/Thessalonica, Nurses/Painters/Witnesses, and The Salonica front, gradually introduce the visitor to the exhibition theme, but also show the profound drama of the Serbian people in the First World War.
A separate segment is dedicated to photographs divided into nine smaller sections, the first of ghich emphasizes the most representative images, followed by photographs of the bombing; crimes; evacuation and retreat; the life of the soldier; the army and charges; death; liberation; portraits.
Museum of Contemporary Art realizеd the exhibition not only from it`s own collections, but by loaning the paintings and photographs from: the Military Museum, Belgrade, the Museum of the City of Belgrade, the National Museum in Smederevska Palanka, the Matica Srpska Gallery in Novi Sad, as well as from the Institute for the Preservation of the Cultural Haritage of the City of Belgrade, the National Library of Serbia, Library of the Serbian Academy of Sciences and Arts, the „Svetozar Marković” University Library, National Museum, Šabac and from the Imperial War Museum in London and Milwaukee Art Museum.
The display encompasses among the others, also the paintings of Nadežda Petrović, Kosta Miličevića, Mališa Glišića, Milan Milovanović, Miloš Golubović, Vladimir Becić, Vasa Eškićević, Vasa Pomorišac, Paško Vučetić, Živorad Nastasijević, Natalija Cvetković, Mihailo Milovanović, Velјko Stanojević, Dragomir Glišić and others, as well the photographs made by Vladimir Becić, Miloje Igrutinović, Risto Šuković, Rista Marjanović, Stanislav Krakov, Đorđe Stanojević, Andra Popović, Dragolјub Pavlović, Jovan Lovčević, and photographs shot by foreigners such as Catharina Sturzenegger, Archibald Reiss, Samson Čarnov, Ariel Varges and André Taponier.
The four languages publication (Serbian, English, French, Russian), published in occasion of the exhibition, includes the text of catalog, and the texts on the history of photography, serbian war literature and historiographical text on the Serbian refugees in First World War, which gave the wider context to the artistic creativity of the period. The patricular contribution represent the biographies of war painters and war photographers.
Author of the exhibition: Žana Gvozdenović, author of the part with photos: Milena Marjanović, author of the design and exhibition project: Nenad Marković.