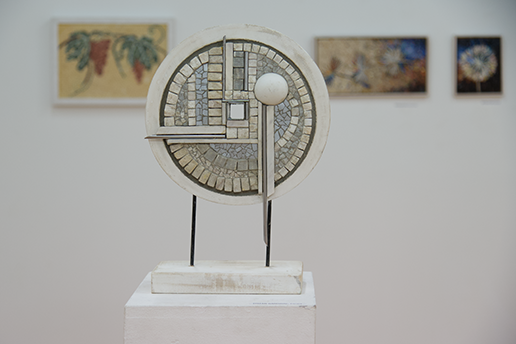 Author and organizer of the festival: Petar Vujošević
The festival was supported by: Austrian Cultural Forum Belgrade, Mapei Company, Faculty of Mining and Geology in Belgrade
Contact: Petar Vujošević, mozaik.fest@gmail.com

There was a novice Potter who lived in the small Chinese town. Working in one of the workshops, he once made a glass bowl. When he removed her from the fire, he was so amazed by her beauty and colour – that he dropped her!

Terrified, the young man just stood. According to the Chinese laws at the time, he should have been punished for the destroyed piece of art. He picked up all the pieces of the broken bowl and escaped into the woods. Instead of trying to run away, the young craftsman came to astonishing idea! He sawed out the wood base for the mosaic canvas and laid out his masterpiece of broken crockery on it and carefully placed the fragments of a broken bowl in it.

The master greeted him with anger in the workshop. However, the unfriendly mood did not last long. A new masterpiece appeared in front of him, shining in a handful of colours. Enchanted, the master kept this artistic technique of joining small glass pieces, which spread throughout the whole China.

That is how, according to the legend, the ceramic mosaic was created. However, it is not the only legend concerning the origin of mosaics. The rest of them you could have searched for at one unique event.

You had the opportunity to take the place of this craftsman – during the III Belgrade Mosaic Festival. An important part of the festival was the mosaic workshop of the Stone and Fracture studio. All participants of the workshop could get acquainted with this ancient artistic technique, but also with the materials used today in making modern mosaics.

Now that you know about the legend, you can surely assume how old mosaic art is. We are talking about an artistic process that has its origins far back in the past, in the 8th century BC Mesopotamia. The mosaic has remained a constant of all the great civilizations of the East and the West – Babylon, Egypt, ancient Greece, ancient Rome, Byzantium…

One might consider that the mosaic is just tied to pieces of glass. However, like its history, the mosaic itself provided many possibilities and variations in the process of creation. The materials used to create one were stone of all kinds (from beach pebbles to rare, polished marble), shells, bricks, pottery, glass, turquoise, ivory, etc. While in the first mosaics the binding material could still be noticed, in the later mosaics the technique was so perfected that the pieces completely gave the impression of the whole.

Why was the mosaic as attractive in the past as it is nowadays? The answer lies in the legend you read. Behind each mosaic is a story, both about its origin and about the image it depicts. From scenes concerning nature, ancient gods, heroes, animals, scenes of important events… Mosaic managed to make each of the depictions more sublime, magical, awaking real admiration and amazement through the play of light and colours.

An article in the British travel magazine Wanderlast demonstrates clearly why the city of Belgrade dedicated a whole festival to this unique art technique. The first place in the Wanderlast’s list of 13 most beautiful and stunning mosaics goes to Church of St. George at Oplenac. Being the largest in the world, it spreads over 3,500 square meters and contains tens of millions of cubes, which are packed – by hand! It should not surprise us that is, indeed, Belgrade that has one of the strongest mosaic scenes in Europe. By holding the festival, organizers proved its important leading position on the international scene.

The festival was held for the third time this year. It was first held in 2016, and then again in 2018. Meanwhile, it was held at the Cultural Centre of Serbia in Paris, where the selection of 25 mosaics from the exhibition Balkan Bridges in Plovdiv was presented.

The festival proved its uniqueness by providing content not only for mosaic lovers but also for artists. The accompanying program included lectures from the science fields related closely to the creators (geology, mineralogy, archeology, mathematics). Topics were diverse, including ancient mosaics in Serbia, ancient writers’ facts noted about mosaics, as well as lectures on the meaning and significance of modern mosaics.

Organisers highlighted both national and internationally important nature of the festival by displaying 100 works from 84 authors from Serbia and abroad. As far as Serbian mosaic art is concerned, all tendencies, directions and important authors have been presented. Organisers held a homage to Serbian great mosaicists Snežana Marinković and Borislav Nježić at the previous convocations. When it comes to the world scene, the emphasis was on works from Austria and Bulgaria.