They speak where everybody is quiet 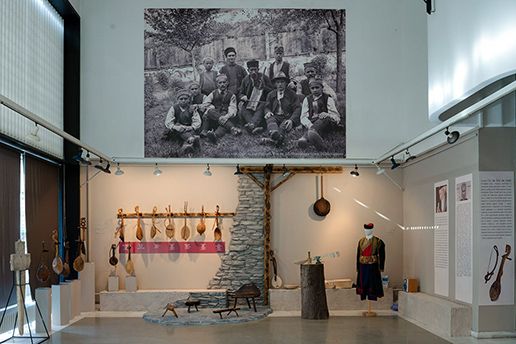 At the exhibition They speak where everybody is quiet, the Ethnographic Museum in Belgrade – Cultural Institution of National Significance presents for the first time to the public a selection of gusle from the Museum’s Collection of Folk Musical Instruments. The exhibition seeks to draw attention to the significance of this unique folk instrument whose main role was to accompany the singing of epic poems, which passed messages of the past to future generations when written sources were lacking. During the periods of the Enlightenment and Romanticism the gusle received great recognition, turning from an anonymous instrument into a Serbian national symbol. Through presented items, the exhibition highlights complex meanings and national cultural values, which changed over the observed period. In the exhibition and the catalogue, accent is laid not only on the specific music component but also on a prevailing social character of objects in a traditional patriarchal family and on a broader, national level, particularly during the formation of the Serbian nation-state.

The exhibition is divided into five sections. The first four sections show the historical development of the gusle illustrated by objects from the museum holdings. The first section presents gusle from the XIX century, which is commonly observed by today’s generations as the period of true gusle playing. These were the times of Vuk Karadžić and Petar Petrović Njegoš, when the gusle were a family instrument, an instrument of the poor and an instrument of blind singers. The second section presents the echoes of the XIX century: World War I. The Museum owns several pieces carried as far as the Thessalonica Front and back: namely, the number of these valuable instruments in the holdings of the Ethnographic Museum is five. The third section covers the period of political change, the formation of the Kingdom of Yugoslavia and the Socialist Federal Republic of Yugoslavia, when gusle players devised ways to express their beliefs through epic poetry and symbols depicted on instruments. The fourth section shows gusle from the second half of the XX century, all until the present day – a period when gusle playing was going through declines and revivals, while, in terms of design, the instruments were, perhaps, increasingly turning into overly decorated compositions in wood – at times justifiably but more often not. A separate section of the exhibition is dedicated to instruments that are interesting in their own special way and are worth presenting to the public: the gusle as inspiration. These pieces cannot fit into a historical overview but they are outstanding and interesting in other terms, such as their unique design, special materials or messages inscribed into them.