Permanent exhibition at the Birth House of Stevan Mokranjac 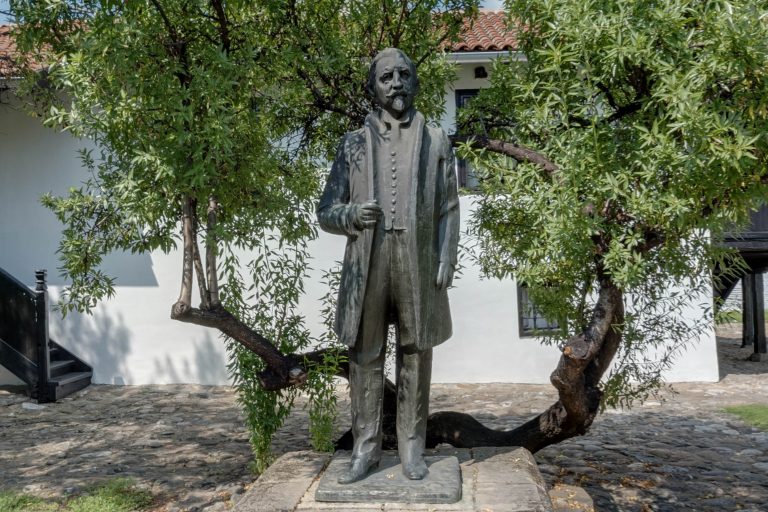 Stevan Stojanović Mokranjac was a Serbian composer, choir conductor, an excellent connoisseur of folklore, and a music pedagogue credited with introducing the Serbian national spirit into classical music. He was born in Negotin on January 9th 1856. The first information about the house where Mokranjac was born and where he spent the first days of his life appeared In May 1934. It was a completely dilapidated house in the very center of the city. Restoration began in 1964. The house is characterized by more modest characteristics of a traditional Balkan town house.

The museum exhibit is located on the upper floor; it is arranged in four interconnected rooms. You enter the largest room in the house from a big porch. There are panels on the walls with a short biography of the prominent composer. Through the exhibited documents, correspondence and personal items, one can follow the life and work of Mokranjac from the first days to the end of his life. The study used by Mokranjac is presented in the same room. It was reconstructed with original furniture and personal belongings of the artist. Among them are Mokranjac’s desk, with a silver inkwell and pen, a chair with a backrest, a table with smoking paraphernalia, a piano which belonged to the First Serbian Music School, a wooden carved chair made by Marija Mokranjac, a lyre, a model lighthouse, as well as artwork by Uroš Predić showing family portraits of Stevan Mokranjac and his wife.

In the other part of the house, there is an “odžaklija” – hearth or fireplace, the place where the house was heated and also used for preparing food. There are copper pans around the fireplace, and next to the wall there is a cupboard for storing food, two wooden chairs and a coat hanger. In the room located in the eastern part of the house, which represents the dining room, the visitors may see the Icon of St. Nikola from 19th century, artwork by Uroš Predić, a silver thurible, a brass samovar that Mokranjac brought from Russia, a chest of drawers and a clock. Other exhibits from this room were donated to the museum by rich families of the 19th century town of Negotin. The display includes a dining cabinet, a table, four chairs, silver cutlery, dishes…

The interior decoration of the second room, in the western part of the house, represents a rest lounge with a piano. The display includes the piano on which Mokranjac worked with the Belgrade Singing Society for twenty-five years, two carved chairs made by Mica Mokranjac and a table with mother-of-pearl inlays, brought from the choir’s guest performance in Constantinople. Family photos are on display on the wall. In the middle of the room there is a wooden table with rattan chairs. There is a brass round tray on the table with fildžan cups for black coffee. In addition to these original items, the furnishings of this room also include: a wooden closet, a metal bed covered with a Pirot carpet, a sitting set – canapé and two armchairs.

In front of the house there is a bronze sculpture of Stevan Mokranjac, artwork of Nebojsa Mitric from 1980.