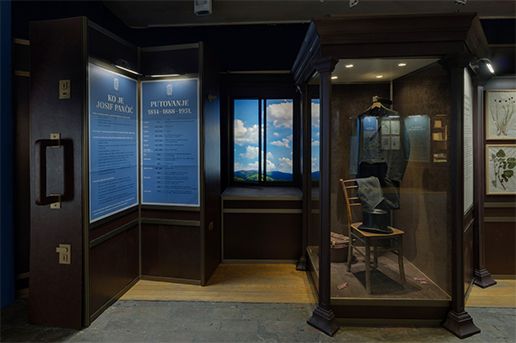 When Josif Pančić left his home village Ugrini near Bribir, in the Austrian Empire, and headed to distant Pest to study medicine, he never thought that this journey would take him even farther, into the then small and new Principality of Serbia. Both before and after this, whenever Pančić encountered crossroads he always chose unexpected directions and paths, guided by some inner vision and reflex of a genius explorer. He ended in Serbia almost unintentionally, but as soon as he arrived he knew that he was at the right spot and remained here forever. He was aware of the unique historical challenge – to establish natural sciences in Serbia, to create and supply the first departments and cabinets for educating the natural historians, to prepare the first natural history textbooks, to raise his first assistants and successors and to establish the Academy which will determine the tasks for science and assess its results. Pančić was aware of the challenge and the opportunity, as well as the exertion of this obligation, but also of his strength needed to fulfill it. And the Principality of Serbia realized who Josif Pančić was, accepted him and supported him, applauded and awarded each of his successes. This was the beginning of the golden era of great Serbian nature scholars.

In the year celebrating 200 years since the birth of Josif Pančić, the Natural History Museum has organized the exhibition: Journey. Josif Pančić (1814–1888), accompanied by the publication with the same name, as an homage to the great scientist, teacher and educator, and at the same time astonishing and prominent human being, who through his hard work, knowledge, way of life and numerous good deeds has obligated Serbia and its people forever.