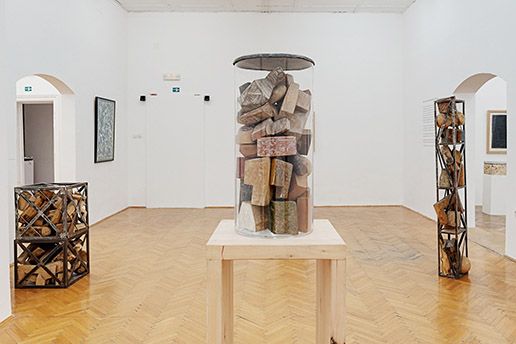 The Đorđije Crnčević retrospective exhibition Flows of Artistic Inspiration by Rajka Bošković, PhD, presents the most important works from the opus of Đorđije Crnčević created during almost five decades of his work, starting from his first creations in 1962 to his last in 2012. The exhibition held at the Heritage House from 24 November to 20December 2015 was organised by the Museum of Contemporary Art in Belgrade.

Quietly, but uncompromisingly, the unobtrusive and dedicated search as well as the sincere rapport with his inner being, lead Đorđije Crnčević to create an authentic artistic opus, which in his best works undoubtedly joined the pinnacles of contemporary sculpture.
The diverse artistic expression of Crnčević’s overall opus shows certain “flows” (or courses) – enduring, uninterrupted and very firmly grounded and present in his undoubtedly free, open and unhindered artistic expression. The most striking “flow”, where the state of anguish, being lost and trapped prevails in the most literal, spatial, as well as the figurative and symbolic sense, can be found in his earliest graphics: from The Cosmogymnasts (1975) to his last sculptures Compressions of Time. There is another completely opposite “flow”, which parallels this one – the course of the lyrical and poetic spirit in a series of sculptures which in an exceptional way reach the shaping of the heights of poetic inspiration (The Head of the Artist) and the monumentalisation of the state of closeness (Two Heads).
A completely separate, however extremely expressive and unyielding “flow” can be found in the Portrait of Solzhenitsyn which was, according to the artist, created “as a reaction to anguish and hindrance – restraint”; as a form of remembering and being reminded of Solzhenitsyn who relentlessly criticized both the heartlessness of the (Soviet) regime, as well as the superficiality of (American) materialism based on their spiritual desolation. The portrait of Solzhenitsyn in Crnčević’s art becomes a symbol of (mute) resilience and the verbalism of silence. Bearing the dignity of character (in a convincing expression of the state of timelessness) these sculptures materialize the idea of the indestructibility of the spiritual forces of man.
By surrendering to very different and at first glance almost unrelated ideas throughout his artistic production, Crnčević travels the “road” from the idea of mute horror and expression of anguish, to the idea of (mute) resilience and (quiet) resistance; from a state of horror to a state of spiritual serenity and unwavering faith in the might and transformative power of the spiritual life of not only the individual but of society as a whole.
The constant turmoil between those two artistic approaches, two poetics, two spiritual states that do not cancel or destroy one another, but, on the contrary, in alternation encourage one another, contributed to the creation of an extremely meaningful and diverse artistic opus, which undoubtedly marked the contemporary art scene of the late 20th and early 21st century.
The exhibition display 102 works – sculptures, paintings, drawings and graphics.

(Dupilо, 1941 – Belgrade, 2013)
Compelted the Acadmey of Fine Arts in Belgrade, sculpture department, and postgraduate studies in the class of professor Miodrag Popović in 1972. He was a member of ULUS (The Association of Fine Artists of Serbia) since 1968 and a member of the 10+ Group (from 1976). As professor at the Higher School for Fine and Applied Arts in Belgrade he tought sculpting as a subject from 1991-2008. Besides sculpture he worked in graphics and painting.
He has been exhibiting as solo artist since 1969. He has had over 20 solo exhibitions in Serbia and abroad, and has participated in numerous group exhibitions organised by: ULUS, October Salon, PROSTOR (SPACE) exhibition, Graphics of the Belgrade Circle, Biennale of small plastics (Murska Sobota), itd.
Participation in symposia and colonies: Aranđelovac (“Marble and Sounds”), Portorož (sculpture symposium “Forma Viva”), Graz (XVI INTERNATIONAL Melernjochen in der Steirmark), Herceg Novi (Art Colony Nikšić); Bor (“Copper“ Art Colony); Kikinda (International Sculpture Symposium “Terra”), Vladimirci (Art Colony Jalovik), Tutin (Black River Art Colony) and others.
Awards: the “Sreten Stojanović” sculpture fund (1968); the “The Soldiers as Painters” exhibition JNA, Belgrade (1969); Youth Colony, Ivanjica (1970); XV Exhibition of the Art Colony in Ečka; awards at the exhibition PROSTOR (SPACE) ‘78 (1978); purchase prizes at the Fourth Biennial of Small Sculpture, Murska Sobota (1979); awards at the I Biennial of Drawings and Small Plastics, Belgrade (1993), Grand Prize of ULUS (1997); ULUS Autumn Salon Awards (2009), and others.
Sculptures in free space: Poet, 1975 (Danilovgrad, Montenegro), Two Heads, 1978 (Dimitrovgrad), Two Heads II, 1978 (Belgrade), Portrait of the Poet, 1981 (Portorož, Slovenia), Totem, 1989 (Kikinda), Rider, 1999 (Sremska Mitrovica), Two Poets, 2008 (Karan Sebes, Romania), The Head of a Poet, 2011 (Apatin).
Works in the collections of: the Museum of Contemporary Art (Belgrade), the Academy of Fine Arts (Belgrade), the National Museum (Cetinje), the National Museum (Kikinda), Zepter Museum (Belgrade), Neuue Galerie (Graz), the Gallery of the Cultural Center (Paraćin), the Modern Gallery of the Art Colony Ečka (Ečka), the Modern Gallery (Niš), etc.
Museum Associate Rajka Bošković, PhD, Head of the Museum of Contemporary Art in Belgrade Collection of Sculpture, curated and conceptualised the exhibition set up, and is exhibition catalogue author.