Exhibition Peasant in the Caricature of Hedgehog 1935-1990 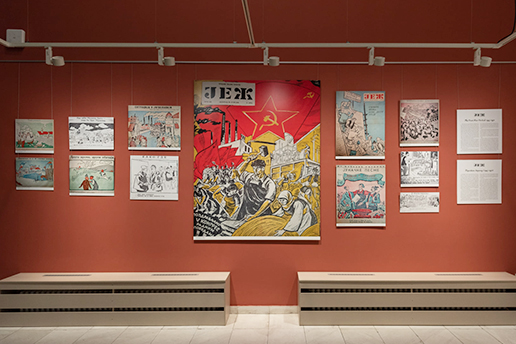 The exhibition presents selected caricatures that were published in magazine Jež (Hedgehog) in the period 1935-1990. As the leading satirical magazine in Yugoslavia, together with related papers Kerempuh from Zagreb, Pavliha from Ljubljana and Čičak from Sarajevo, Hedgehog has created and dictated the “pulse” of the entertainment press for many decades. Therefore, the exhibition and the accompanying catalogue will offer visitors a nostalgic reminder of the years in which satire and humor shaped the Yugoslav reality. It is also homage to the Sheared Hedgehog, which has been the most important satirical paper in this region.

One of the main characters of the caricature is the peasant, who was followed through the caricature for fifty-five long years, during which he reflected in a specific way on the socio-political events in the country and the World. From the first issue of The Sheared Hedgehog, published in 1935, he ridiculed his difficult peasant life, solved national problems in the Kingdom and feared war threats. In the post-war years he became a hero full of enthusiasm and a participant in the socialist renewal and construction of the country. After that, the society stepped into the “golden age” when caricature was dominated by brighter themes from everyday life. The pages of Hedgehog ridiculed the peasant’s obsession with courtrooms and taverns, his tendency for market fraud and the accelerated modernization of Yugoslav society which was a great unknown for our peasant. The popularity of football players, Lotto tickets, turbo-folk music, appearance of migrant workers to other countries, and youthful manifestations of rebellion embodied in consumption of drugs and sex – all these topics found their place with the peasant in the cartoon. Finally, in the last studied decade, the cheerful graphics were replaced by gloomy and cumbersome caricatures that reflected the economic and political crisis.

In the caricature, the peasant was easily recognizable by his folk costume, primarily by the hats he wears, šubara and šajkača. The hat had different connotations in different periods and changed its meanings. It functioned as a sign of identity and a marker of differences among the neighboring groups. In that sense, it will be shown that for more than half a century, due to various socio-ideological circumstances, the depiction of peasants in Hedgehog caricature was influenced by dominant ideological discourses, so it was conducted “from above”. Placing the character of the peasant into the context of historical events, we will notice that over the decades it took on different meanings and was manipulated, so both pre-war and post-war history of the Yugoslav/Serbian entertainment press was partisan, ideologized and indoctrinated.

It is equally important to note that the exhibition and the accompanying catalogue emphasize the importance of caricature as a concise visual form of expression. Its theoretical-methodological potential as a source of research is particularly prominent in cultural studies of the phenomenon of costume.

The exhibition is the result of many years of the author’s work on this topic. In the research conducted for the needs of her doctoral dissertation, a fund of a total of 1,075 caricatures was reviewed, published in more than 2,650 issues of Hedgehog, and the exhibition presents a selection of a smaller number of caricatures.