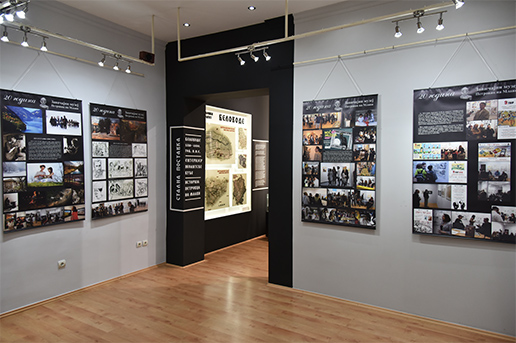 The Homeland Museum Petrovac na Mlavi was founded in 1998 by the Municipal Assembly of Petrovac na Mlavi, and it started working in 1999. The reason for the establishment was the results of research of the late Neolithic site Belovode near Veliki Laol, which has been continuously realized since 1994 within the project of the National Museum in Belgrade as the parent museum institution of the Republic of Serbia, and in cooperation with the Pozarevac Museum in whose jurisdiction the Braničevo district is protected.

Since 2002, the Museum has been located on the high ground floor of the former post office, in a building that, together with the court and municipal buildings, forms the old core of Petrovac and represents a cultural monument. The exhibition space, conceived on the principles of modern museum practice, was opened to visitors in 2003, and since 2018 it has been expanded and adapted thanks to the support of the Municipality of Petrovac and the Ministry of Culture and Information of the Republic of Serbia.
As a museum of complex type, the Homeland Museum has four collections: Archaeological, Ethnological, Historical and Art Collection, which includes three Legacies: Legacy of Božidar Božo Veselinović, Legacy of Dragan Savić and Legacy of Stanko Kostić, artists from this city.
In addition to collecting, processing and storing museum material from research in the municipality of Petrovac na Mlavi, the Museum annually organizes an average of 10 thematic exhibitions of various characters. More than half of the thematic exhibitions during the year are realized by the museum’s curators as author’s projects, while the other thematic exhibitions are of a guest character.
In addition to its core business, the Museum, by establishing a pedagogical and propaganda department in 2013, pays special attention to working with preschool and school-age children through workshops and other programs. Also, special attention is paid to the collection, promotion, affirmation and production of contemporary fine art.
Since 2014, the Museum has launched the “Comic Ninth Trip” event in memory of the character and work of Božidar Božo Veselinović in order to promote comics and illustration. As a permanent program of the museum, in 2017, an art colony was launched in cooperation with art historian Vlastimir Nikolić as a selector, and since last year, when the museum received the legacy of Dragan Savić, one thematic exhibition from the opus of this versatile artist has been presented annually.
In 2015, the Homeland Museum joined the event “Museums of Serbia, 10 days from 10 to 10”, and for the program realized in 2016, it received recognition “Museum for 10”.

The Homeland Museum – Petrovac na Mlavi, as a relatively young museum, which has existed for only two decades, has established and established cooperation with all relevant associates in the field of protection, research and presentation of cultural goods and holders of contemporary artistic and visual creations, as well as related institutions. both at the local and regional and national levels.